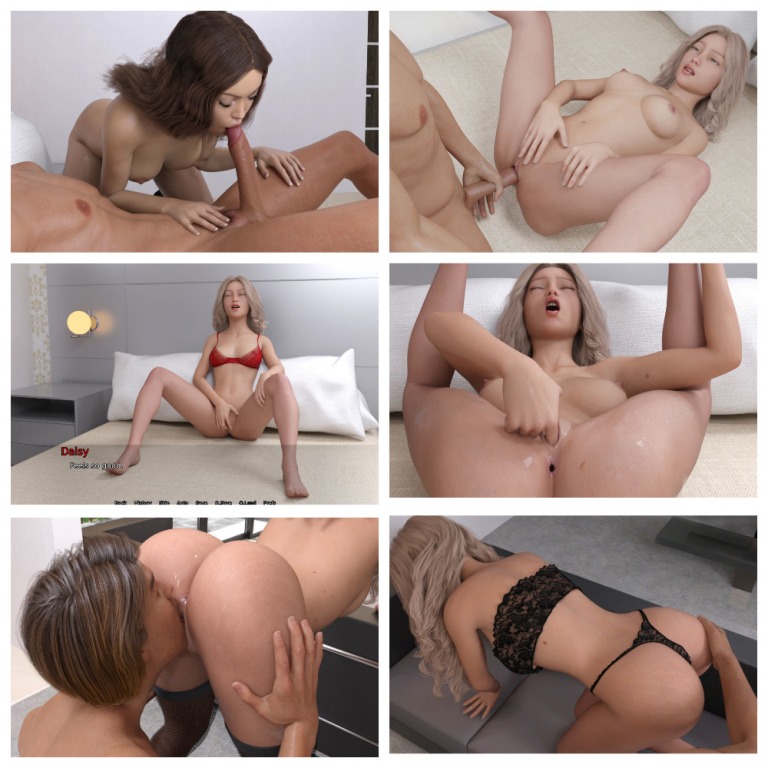 A struggling writer, you just managed to sell a book for enough money to afford a house.
Life in the suburbs promised to be everything you dreamed of in the city: more space, more quiet, and
maybe without roommates, it was time to kick start your love life. At forty-three, you weren’t getting any younger.
Everything changed when a young college student responded to your advertisement to sublet one of the open bedrooms.
She was blonde, eighteen, and as you quickly discovered, had a secret desire. As her landlord, you have time, and
feel obligated to help her pursue her fantasies, however depraved they might be. After all, when you thought about
kick starting your love life again, you never imagined it could be so…fulfilling.

Day 6 evening, again with Lily, and depending on love scores, you might get the first ending, with Lily. There’s a special animated scene with more customization than usual, and more animations than most scenes.
Day 7 morning…there are branches here, and depending on love scores, attention you’ve given to one house guest or another, you might land on the Rose Ending, also included in this update.
Day 7 morning…maybe you’ve had your eyes on not one, or two, but ALL the house guests. I’d be lying if I said this was not my favorite option. For this path, you’ll get a new scene in the morning, where both Lily and Rose help MC get to the finish, as only two house guests can. Lots of animation in this one, though only on act with all three.
Story, continued same sound effects as before (have spent a limited amount of time into understanding how I could make these even better, which I’d like to do, probably in the update or two).
36 static images, 3 fully animated scenes, all of which are in the reply gallery. Two of the 3 scenes are the endings with the two love interests, Rose & Lily.
Updated Sept 10th with new Ren’py code to help with image lag, stutter, and performance; hopefully that’s a big improvement…and a bonus sneak peak of the harem ending with all three love interests, another fully animated scene with ~8 animations, also in the replay gallery.
In total then, this update has *four* new scenes in the Replay feature, the most I think I’ve ever added in a single update, since this was largely focused on animations, not more static content.